It’s not just parties and parades 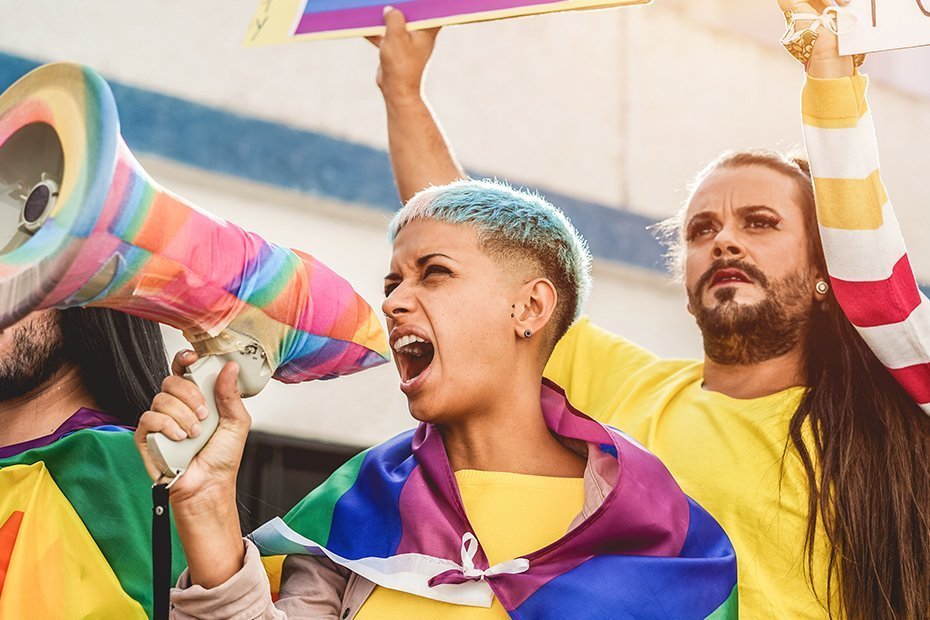 June is Pride month. It’s usually filled with loud, unapologetic celebrations of the queer community, and it’s a damn fun time. But while things still haven’t fully opened up, many places won’t be having the parades we’re used to. Instead of parties in the streets, we’re seeing online celebrations and conversations. And until we can all gather again, we can use this month as an opportunity to remember, build community, listen, educate, and advocate for the changes that still need to be made.

Back in June 1969, police raided the Stonewall Inn, a well-known hangout for gay and trans folks in Manhattan. Raids were common, happening about once a month at known queer establishments and were undeniably acts of transphobia and homophobia. But in the early hours of June 28, 1969, the crowd inside the Stonewall Inn decided they’d had enough of being shamed. They fought back and started what would become a week-long protest for the rights of the queer community. The riots ignited a movement for equal rights: queer activist organizations, publications and events were rapidly organized and mobilized.

Since Stonewall, rights for queer people have come a long way in North America. We now have the right to marry, adopt children, and be protected against a hate crime. While these rights of the queer community are protected under law, the reality remains: there’s still a long way to go and being queer can be a dangerous, scary and isolating experience, especially during a pandemic.

We need to understand and address the issues that many queer communities, specifically trans people of color and lower-income folks, faced during the Covid-19 pandemic, including discrimination in the workplace, higher unemployment rates and limited or no access to healthcare. Mara Keisling, Executive Director for The National Center for Transgender Equality, spoke with us last year, and gave us insight into how the pandemic was disproportionally impacting members of the trans community through systemic failures and discrimination. We also spoke with LaLa Holston-Zannell, Trans Justice Campaign Manager at the American Civil Liberties Union (ACLU) to discuss trans rights and, ways to support Black trans people.

Now that we’re moving through the pandemic, we look ahead with cautious optimism. We need to continue to embrace, champion and uplift queer communities in culture and, in the case of legislation, we need to double down.

We’re eager to abolish conversion therapy in Canada, which will end harmful discrimination aimed at changing a person’s sexual orientation to heterosexual or to change one’s gender identity to match the sex they were assigned at birth. The Government of Canada is proposing legislation to criminalize conversion therapy across the country. If you are in Canada, add your support to this bill now.

We may not all be out partying with our friends or parading in the streets to celebrate Pride this year, but we can use this time for action. We can pause and remember how far we’ve come, educate ourselves, listen to others, and take action to end discriminatory practices and systemic, harmful discrimination. That’s the power of Pride.

Reproduced with Permission from LUSH

Wow! We did it! "ALL" and "US" Under the Rainbow Love Everybody Symbol